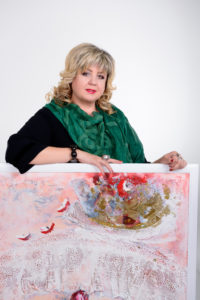 Member of the UNESCO international Association of arts

Member of the Union of artists of Moldova and Romania,

Chairman and founder of the Cultural Center and gallery “ARTELIT”.

Winner of the prize of the national Museum Georgi Enescu (Bucharest, Romania), Honorary Diploma Of the international Competition in Textile Design.

The artist performs her works in various styles and genres: painting, drawing, batik and tapestry. March 22-23, 2019 in the city of Surgut for the first time will be held all-Russian holiday “martsishor”, listed by UNESCO in the register of masterpieces of world cultural heritage. It is important that this festival will be held in Surgut, as 2019 is declared by Russian President Vladimir Putin as the year of Moldova in Russia.

He is the Creator of numerous projects since 2004

“ART textiles”,”ARTVIN PURCARI”, “IDENTITY IN the MODERN DIALOGUE of CULTURES” together with Yarinsky organizer Zenovia Shulga , in which are annually held open-air gathering of artists of different age from all over the world.

Her works have been exhibited in galleries and museums , USA, Belgium, Holland, India, Romania, Bulgaria, Switzerland, Ukraine, Turkey, Poland, Germany, Greece, Russia, Bahrain, where they have been awarded numerous national and international awards.

Elvira’s works are in museums in Romania, Poland, Austria and in private collections around the world.